Previous Item
Theming for the iPad (updated) Two Column Forms (or something like that...)
Next Item

The Shape of Things to Come?

In recent conversations in the #exponent-cms irc chat on irc.freenode.net we’ve been discussing how best to maintain Exponent using the most current software technology.  Though Exponent has been based on YUI (Yahoo User Interface) for years, there are more commonly supported libraries which might be worth considering.  Some of these have familiar names in the developer community such as ‘jQuery’, ‘Twitter-Bootstrap’, and the ‘LESS’ css stylesheet compiler.  What’s more, several aspects of YUI are currently broken and unusable in Exponent (e.g., we ship v3.4.0 because newer versions such as v3.4.1, v3.5.x and the soon to be released v3.6.x break our displays).  (Rest assured, we'll maintain backwards compatibility) So here’s where Exponent MIGHT go within the next several releases.

The LESS css stylesheet compiler will likely be implemented and ship with v2.0.8, though not necessarily in its final configuration.  LESS allows a designer to create stylesheet templates with variables and other programming commands to allow the ‘machine’ to do most of the work rather than the designer needing to continually re-write redundant styles.  More information can be found at http://leafo.net/lessphp.  You will be able to fully use .less files in v2.0.8, however their location MAY have to be moved and their inclusion statements MAY need to be edited in future versions once we finalize support.

jQuery is a javascript library similar to YUI, but is designed for smaller projects.  However, it is more widely used and supported across the developer community.  If you were to browse the internet for examples of coding solutions, you’d most likely see several based on jQuery and very few solutions based on YUI.  There are tons of interface add-ons and other solutions available for jQuery.  More information can be found at http://jquery.com/.

Twitter-Bootstrap is a new user interface library of components and styles similar to YUI .  It uses both jQuery & LESS.  In many ways it is much simpler to implement than YUI and is more responsive to various display sizes without the need for multiple stylesheets or themes.  More information can be found at http://twitter.github.com/bootstrap/.
We already have locally running copies of Exponent using these technologies in the form of a custom theme which could easily be dropped into an existing v2.0.8 installation if desired.  So a future version of Exponent with a Bootstrap theme could look like this: 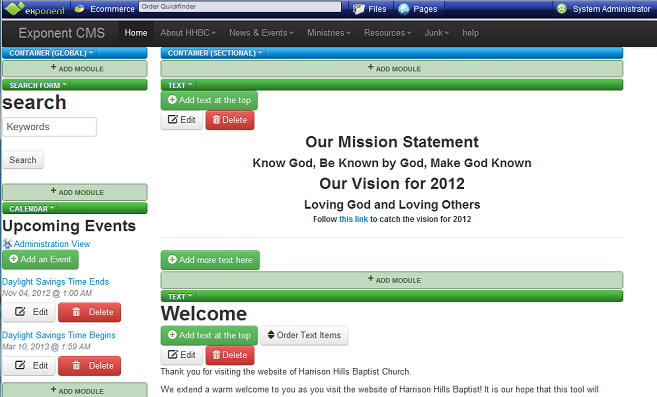 Tweet
Previous Item
Theming for the iPad (updated) Two Column Forms (or something like that...)
Next Item